20 years ago, Los Angeles Maritime Institute staff and volunteers completed the ambitious undertaking to build from the keel up twin 110-ft brigantines designed explicitly for youth education, sail training, and open-ocean voyages. The construction took place in the center of what is now LA’s Waterfront. It was a phenomenal endeavor exemplifying the commitment to LAMI’s mission and the vision of founder and experiential-education pioneer Captain Jim Gladson.

long-time LAMI family-member Ed Steiner shares a story from the time of the building of the brigantines that perfectly captures the camaraderie, imagination, and unstoppable ‘can-do’ attitude, or “LAMI Magic,” behind such a grand accomplishment.

Read Ed’s story below and reconnect with the twin brigantines and the spirit of LAMI!

Show your love for the ships and youth education by donating to LAMI’s 100 Year Campaign today!

Why is there a hole in one of the bunks on each Brigantine?! 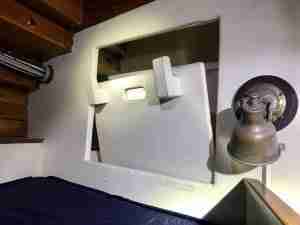 The keels were laid and signed. Some boatwrights were busy sorting the frames while others fitted together the pieces to form the cutwater and the stem. The public watched from outside the “Brigantine Boat Works” and were invited to take free weekend tours, led by trained volunteer docents. 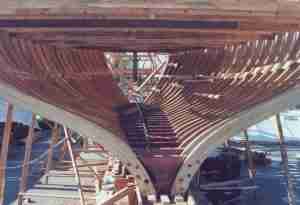 At the conclusion of one of these tours, an unusually tall gentleman who took delight in describing himself as 5 foot 16 was inspecting the “scrap bin.” He approached the docent and asked if he could buy some leftover pieces of Purpleheart wood. The docent said “Talk to Captain Jim in the office.”

In the office, the tall gentleman introduced himself as Bill Kelly, President of the El Camino Wood Turners Guild. Hearing Bill’s request, LAMI founder Captain Jim Gladson said, “I won’t sell you those pieces of wood, I’ll give them to you.” Before Bill could respond, Jim went on, “But, for every two pieces we give you, we’d like a finished turning that we can sell at our fundraiser.”

That was the start of a long and mutually beneficial relationship. An example of what many call “LAMI Magic.” The Woodturners did indeed bring back beautiful pieces of turned wood art that raised substantial funds. More importantly, they donated their labor, machines, and tools to create every piece of turned wood on both brigantines. All the spindles on the taff rails and the fife rails, all the belaying pins, even the bezels around the bunk lights, to name just a few. 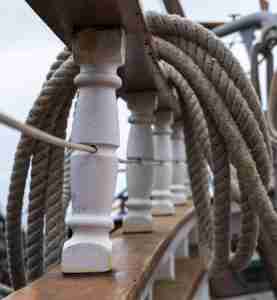 Bill also became a valued volunteer. He loved sailing on the multi-day voyages. He taught the kids to make their own Monkey Fists. The kids loved him.

Bill Kelly passed on in the Fall of 2017. Bill’s profoundly positive impact and the beautiful turned-wood fixtures continue to be essential ship elements and are maintained with care. LAMI friends and loved ones held an at-sea memorial for Bill on the brigantines in January 2018. 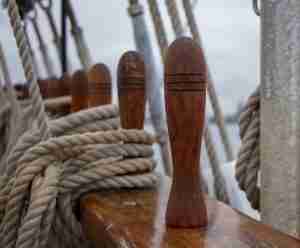 There is a single bunk in the crew quarters on Irving and Exy where the bulkhead at the foot of the bunk has an opening where Bill’s feet just fit.  It’s rumored that Bill, being the salesman that he was, talked the master boat builder into making that modification.

Whether you’re a seasoned LAMI Alum, Volunteer, or new to the organization, we all can appreciate the positive impact LAMI educational tall ships have had on tens of thousands of young people. Please consider donated to keep them